A Short but Completely Political Post: Fred for Pres. in '08

Had my eye on former Senator Fred Thompson for a while now. He hasn't thrown his hat into the Presidential race yet, but he seems to have us grassroot conservative voters excited.

In a field of wishy washy liberal and moderate Republicans Fred Thompson is clearly a Reagan Republican and stands head and shoulders above the rest of the field.

Before announcing a run for the Presidency he recently polled 12% in Iowa which puts him in third place in front of Romney, and in another poll would beat Hillary in the general election.

I'm a gamer, Jim. Not a photographer.

As promised here are a few more photos from the World Ice Art Championship.

Such as they are.

A few of them turned out. Most turned out more blurry than this: 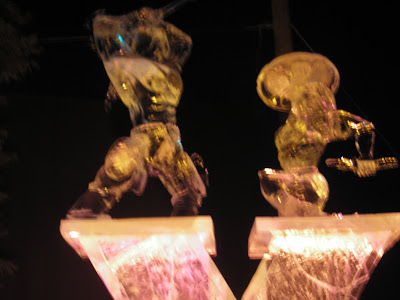 You can at least tell this is a shark. 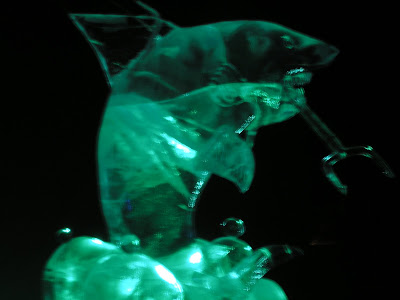 I shall relegate myself to daytime photography in the future.

Here are the ones that turned out.

This one had a snake rising from a basket on the rear hump. Saw a picture with the snake on a blog, or in the newspaper earlier in the month. It had shattered before I got there. 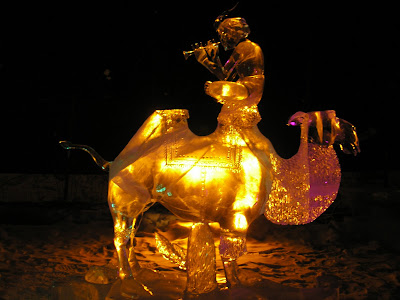 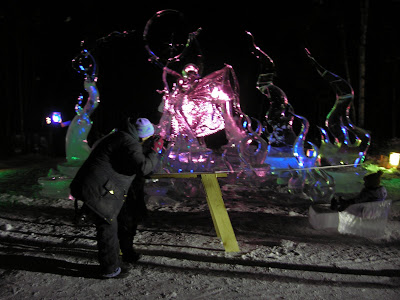 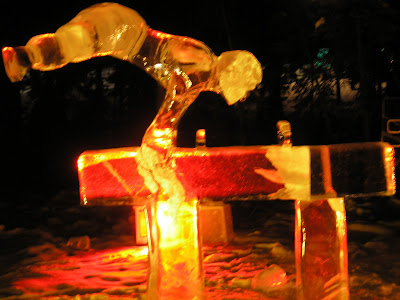 This Rushmore imitation depicts some Alaskans of note. None of whom would be familiar to most of my readers. 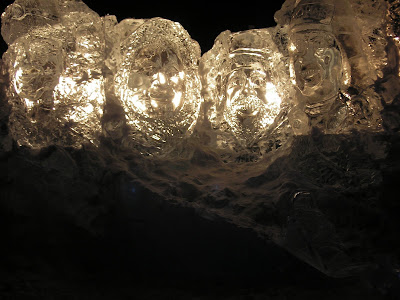 I should note that these photos are just a few of the pieces of art on display. I only took a picture of every 3rd or 4th sculpture, and only posted a few of those. Many of the sculptures are rather abstract. Good, but abstract. Those don't really interest me.

Others are so big and involved that it is hard to take a picture of more than a corner of the piece and still retain high enough resolution, such as this: 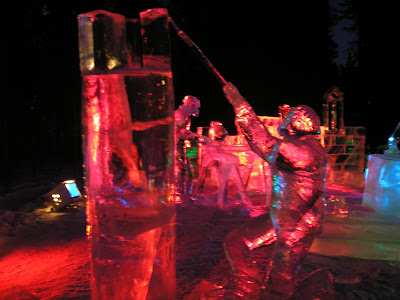 Addendum to Primer for Taxi Passengers

11. Don't even think about asking for a break on the fare if you aren't showing any cleavage.

Want to call the police?

Here. Use my phone.

a. this Crown Vic probably isn't any faster than your car.

Unless you own a Ford.

b. I don't know how fast this Caprice will go.

3. The reason I asked to see your money is not because you are: Indian, Eskimo, black, Mexican, white, a G.I. or cute. It's because...

a. you ripped me off before.

Oh look. And you don't have any money either. Imagine my surprise.

4. I don't care if your boyfriend pulled a knife on you. I'm not letting you charge a ride to the bar to get away from him.

5. Just because the price isn't posted doesn't mean the service is free. You would be wise to enquire about the price before utilizing the service.

There is a $50 surcharge for puking in the cab.

6. Yes, I do know were you can get drugs even though I said I didn't. Yes, I am playing stupid. Just give me an address and I will get you where you want to go.

This is a small town. "Take me to the he crack house on Dunbar," or "Let's go to Perry's place," is good enough.

7. Even though it's not the route you usually take, it is cheaper to go this way. I will gladly get you there by your route, just don't wait until we are 3/4 of the way there before you start complaining.

8. If you stink we are rolling down the windows, even if...

b. that obnoxious smell is $200 perfume.

9. If you tell me "Golden North Motel" and you meant "Golden Nugget Motel" you will either walk or pay me to get you to the right place.

Braving the Cold So You Don't Have To

A smattering of photos from this year's Ice Art Championships with numerous gratuitous shots of my kids.

Check back in a couple days. I will try to get some nighttime pictures posted. The detail of the sculptures is brought out with back lighting.

You ought to be able to click on each picture to get a larger image. 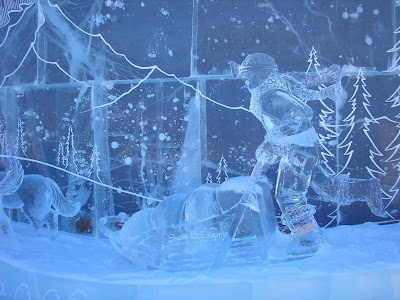 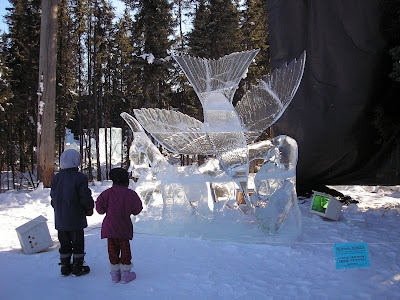 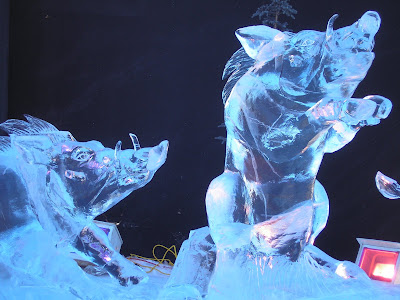 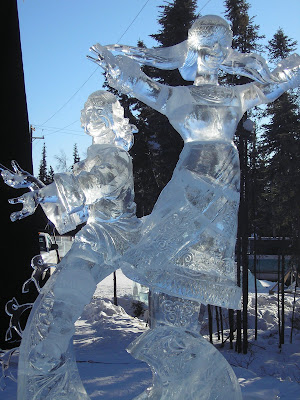 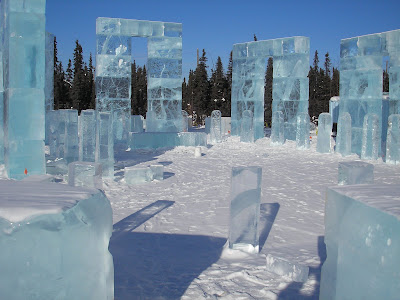 The mountain goats were my favorite. 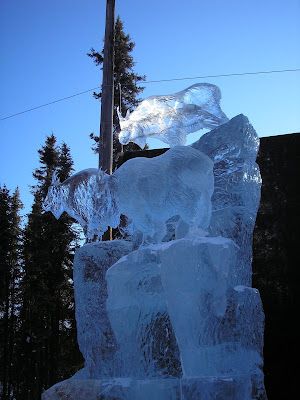 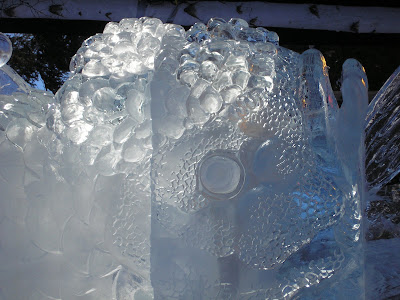 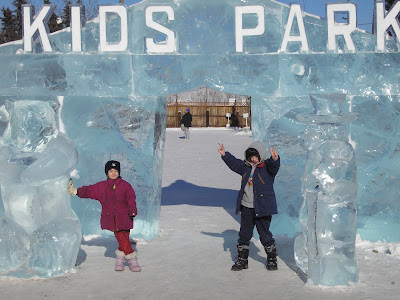 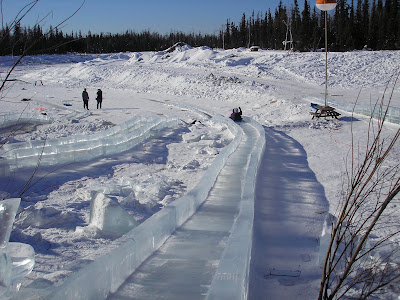 The "tear drop" spinners were all over the kiddie park. The temperature was a little cold to get the maximum effect, but when the temperature gets up around 30 F. once you get them spinning they don't stop. 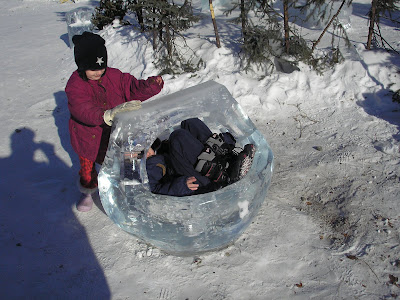 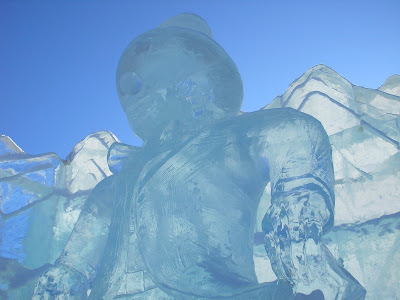 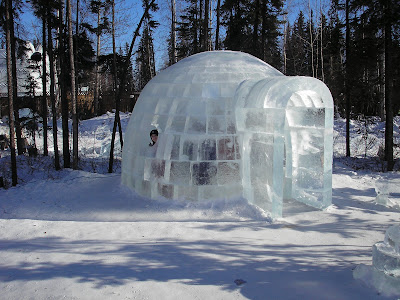 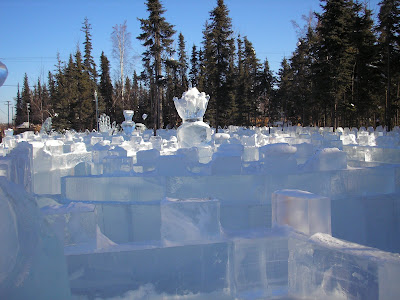 Volunteers and artist come from all over the world to work in the Ice Park. It is truly an international event. Here's the official link if you are interested.

We have a wiener

Oh, did I mention that all three family members won the Iditarod wearing the number "13" on their sixth running?

The staff and management of &Games extends a hand of congratulations to the latest winner of "The Last Great Race."

Attended the Brimfrost game convention in Anchorage this weekend. We had a better turnout of boardgamers this year than previous years. I was mostly able to stay busy playing boardgames all weekend.

The highlight for me was finally winning with the Prussians in a game of Friedrich. I got to play Family Business and Yspahan for the first time, and I won the Catan tournament. I was on a bit of a roll that afternoon, we played two preliminary rounds of Catan and a final round of which I won every game I played.

I left Fairbanks for the convention early Friday morning. The sky was as clear, the air was crisp. I made a couple stops to snap some pictures.

The sky was so clear that there were multiple sun dogs (rainbows around the sun) if you look closely you can see a second sun dog near the right edge of the photo. The mountains in the distance are obscured by blowing snow, not clouds. 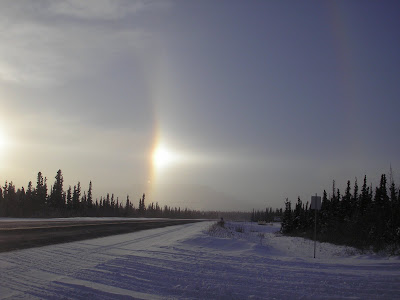 Some random mountain that looked much cooler in person than it does in the photo. The morning sun reflecting off the side of the mountain as contrasted to the shadows in the valley was impressive at the time. 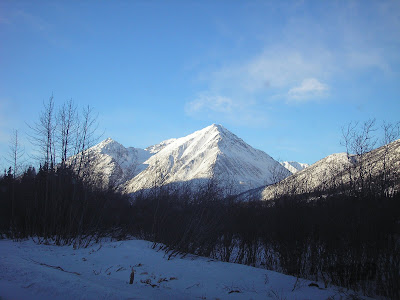 Although it is possible to see Mount McKinley from the highway, it is usually obscured by clouds. This was the first time I have seen McKinley on the road to Anchorage in a couple years. 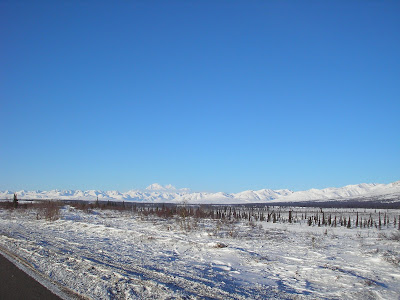 At this elevation, on top of the Alaska Range, the landscape is quite tundra-esque. The wind at this elevation that morning was in-frickin'-tense. The temperature was only -10 F. but the wind was screaming across the top of the mountains. In addition, the sun was so bright, and directly at my back, that I couldn't see the view finder on my digital camera. It was too damn cold to try and position myself so that my shadow was over the view finder so I could see what I was snapping a picture of. I just stepped out of my car, pointed the camera in the general direction and snapped several pictures, hoping one would turn out. 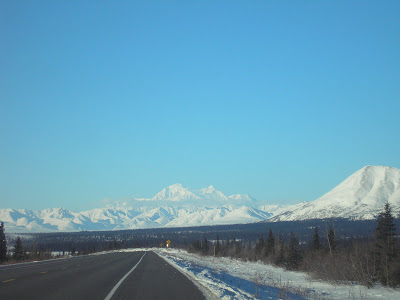 Keep an eye on Lance Mackey. Lance is a cancer survivor and long time dog musher. He just won the Yukon Quest for the third time in a row. (The Yukon Quest is the lesser known and more difficult of the two 1000+ mile dogsled races.) As of early this morning he was leading the Iditarod, and will undoubtedly be a contender.

If he can pull it off he would be the first person to win both the Iditarod and Yukon Quest in the same year.

Perennial Iditarod winner Doug Swingley of Montana had to scratch and was flown to the hospital after an accident.

It's that time of year already?

It's March already? After a mild December and January, it has been cold lately. Alaska cold. It has been down to -40 and colder at Coldfoot Manor almost every morning for the last three weeks.

The event is mostly geared toward miniature gamers, HeroClix and CCGers. Boardgamers are usually relegated to a corner, but it's the corner where all the handsome guys and babes are lingering. I will be bringing a carload of games. Other people will be bringing games. We should have a good selection.

I note that there will be a Catan tournament sponsored by Boscos. The wife and I played in the Catan tourney last year, won gift certificates, and never used them. I wonder if the wife still knows where they are?

Note to wife: Don't let me forget to bring the camera.

Note to Cisco: Be prepared to teach Die Macher.

Note to babes: Dame Coldfoot will not be accompanying me this weekend.

News of the day

Been a big hubbub on the news about Ann Coulter using the words "faggot" and "John Edwards" in the same sentence.

I always get a kick out of watching Ann speak the obvious to tweak the noses of hypersensitive liberals. Remember this one, "Clinton is in love with the erect penis." And how could you forget this classic, "Liberals love America like O.J. loved Nicole," but this time she got it wrong.

John Edwards is clearly a "pussy", not a "faggot".

I demand a correction.