The dingbats are out

Picked up this young lady with a miniature hairy dog. I don't normally have anything against dogs, but people who bring dogs in cabs generally have stinky dogs. If the trip is long enough the dog smell can linger.

She asked if the dog could come along. I said, "If he doesn't stink."

That's what everyone says.

She continued, "I give him a bath every other day."

"Well, they say it's bad for dogs to bathe them every day."

Picked up another young lady, probably 22 or 23 years old. I asked, "And how is your evening?"

"My boyfriend just broke up with me."

"How long had you been dating?"

We drove a couple more blocks without conversation. Then she said, "I was going to break up with him last month."

"Then I found out he had been cheating on me with my best friend."

"You decided not to break up with him after you found out he had been cheating?????

"Well I really thought we were back on track and that it would all work out."

"You decided not to break up with him after you found out he had been cheating?????

"It's just so hard to find a new boy friend."

"You've only been looking for how long? Four hours?"

Four hours is a lifetime to some insects, but lady those insects have more on the ball than you.

Didn't say it, but I was thinking it.

The rarest of stories

A story that incorporates both gaming, taxi driving and is short.

I picked up this college couple returning home from a date. Probably their first date, probably both seniors or graduate students. They both fancied themselves as writers and were talking about getting their work published. Specifically they were talking about what magazines to submit material if you hadn't been published, where they had sent material, who had published their material, which of their friends had been published, etc.

Turns out the gal had a story published in some magazine. She was reluctant to tell the dude which magazine, apparently it was a rather minor literature magazine. The dude had not yet had anything published.

Then I chimed in, "I've been published."

That comment took all the air out of the cab.... For the rest of the trip.

They both looked at me as if they were thinking: You? The dopey looking cab driver? Published?

After a long pause the gal said, "Ummm. Where were you published?"

I had posted an article on line concerning the history of modern boardgames, and Flagship Magazine, a British publication, asked for permission to reprint it, naturally with proper editing.

That was pretty much the end of their conversation. Any sexual energy that may have been in the air was gone. Hope I didn't ruin their evening.

Cute couple. I hope they had another date.


I have been remiss not mentioning Flagship magazine before. The free issues they sent me as compensation were quite good. It was a general interest, non-video game, game magazine. It had articles and commentaries on CCGs, boardgames, miniatures, etc. but was not nearly as commercial and over loaded with CCGs and advertisements as was Games Quarterly. It had much more boardgame content than I had expected. In fact the issues I saw were worth buying simply for the boardgame content.

As promised weeks ago here are some pictures from the annual boardgame extravaganza in Denali Nat'l Park.

Unfortunately, not a lot of the pictures came out. So here are the majority of the ones that did turn out. You can click on each to see a larger version.

Above For perspective there are people in this photo. Their heads are near the point the river, bank, and foliage come together on the left.

Because pictures are so sparse here is a bonus picture of me: Note that is not food in my beard. It is merely grey hair. However I do have to own the dandruff on my shoulder. 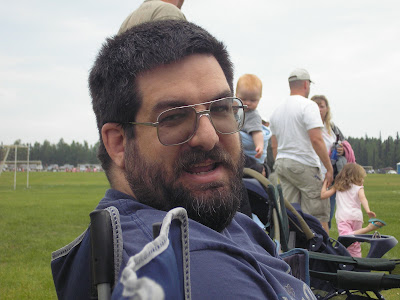 You may or may not find this interesting

For some reason this comment struck me as interesting: French translations are often mediocre, full of meaning and grammar mistakes, while English translations of German games are usually accurate.

Wonder why? I don't know enough to form an opinion myself. I don't speak French and my readers will know that I only have the most basic grasp of written English. I was fairly fluent in practical German years ago, but not fluent enough to decipher nuance in a rule-set.

Short post in which I reveal my true intentions

I recall a conversation I overheard while perusing a game store the last time I was in Anchorage.

Some guys were talking about a local fellow who had bought a house (in cash) with the money he made by selling his collection of Magic cards. I was skeptical, but the teller of the story seemed sincere, and the clerk verified the story.

Well, I met the fellow. His name is Tom and he now lives in North Pole just down the road from me. You can read a brief version of the story on his BGG profile here. Nice guy, hasn't played many modern German games, but he was over to play a couple games on Friday night. I think there is potential for me to turn him in to a boardgame snob in a relatively short period of time.

I am so jealous

A tourist lady got into my cab, "Oh! You listen to A Prairie Home Companion?"

"You married a good man. Where do you need to go?"

"Just a minute, we need to wait for my husband."

A moment later a man got into the cab.

"Oh. You listen to A Prairie Home Companion."

"I listen to it three times a week."

"I told him already, dear."

"Yeah. I listen to the live show on Saturday evening..."

"I already told him."

"...the re-broadcast on Sunday morning and then..."

"I already told the man, dear."

"...I catch it on Sunday afternoon on a channel out of Toledo."

"Where are you folks from."

Note to self: If I ever move from Fairbanks, Illinois is now at the top of my list.


Our annual 4th of July boardgame extravaganza in Denali Nat'l Park had a good turnout this year. Everyone had a lot of fun. The weather was not constantly rainy/drizzly as in years gone by, in fact it only rained at night.

For the first time ever there were more gamers from Anchorage than Fairbanks. Several of my Fbx gaming buds failed to show for reasons yet unexplained, but this was more than offset by the new attendees from Anchorage.

Played Friedrich, 1835 a couple times, Age of Empires III, Imperial a couple times, Antike, Lifeboats with the kids, introduced Puerto Rico to a newbie, and Hollywood Blockbuster among several other games.

Too bad it wasn't an extended weekend, but we'll be back for four days next year.

Now that I'm finally unpacked and have found the camera look for pictures in the next couple days.