It started when the motorcycles and geese started arriving

You can't tell by looking at the foliage, 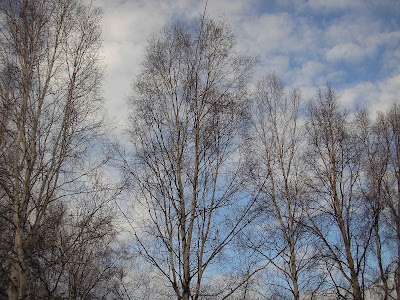 You can't even tell by looking at the ice still on the rivers. 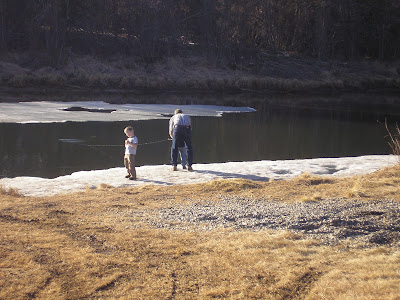 The grass hasn't even started to green up. 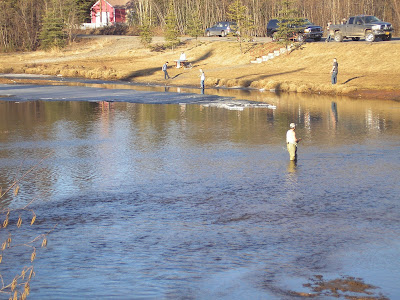 But this is a dead give-away. Spring is in the air. 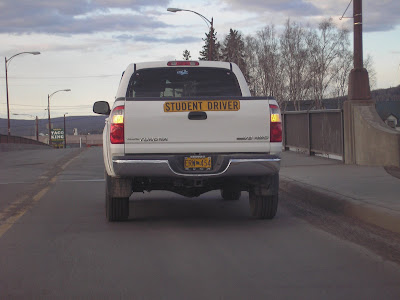 Student drivers are out and about. Ahhhhhh, I can almost smell the dandelions.

Don't usually enjoy stuff like this, but the wife was able to score tickets to some Bar Association banquet that will feature Chief Justice John Roberts.

Justice Scalia spoke in town a couple years ago and I'm still kicking myself for missing that.

Here's another one: A half mile of lard

First weekend of the month. Military payday, social security checks are out, welfare payments are being squandered. The bars are closing. The temperature is -30, and all the taxi companies in town are backed up for at least an hour. Bar patrons are waiting for cabs all over town.

This is Fairbanks, Alaska. We don't wince at -30. The mere fact that it is cold is no reason to stay home. In fact, at a mere -30 most bar goers only wear a light jacket.

I pulled up to a bar. Two groups of people were freezing their butts off waiting for cabs. They had been waiting outside for at least 30 minutes since the bar closed. None were dressed for the cold.

They all agreed to share a cab and piled in.

Eight passengers (nine including me) in a Crown Vic with bucket seats. At this point you are saying, "Tight fit. But it was cold. I can see eight passengers squeezing into a large car."

One group (a group of truck drivers) only had to go a half mile, but it was in a different direction than the other party (two Mexican couples) needed to go. The second party did not want to wait even 5 minutes for me to return. So, with the trunk dragging and me leaning heavily against my door we left.

It was extremely loud in the car, but as soon as we left everyone noticed I was taking an unusual route.

"Look people, we have over $1000 dollars worth of seatbelt violations in this cab, and we are a rather obvious target. I thought I would take the back streets."

The truck drivers laughed. They understood the ramifications of getting pulled over.

The fat Mexicans and their fat wives did not understand the wisdom of my maneuver and started accusing me of running up the meter. I offered to take them back to the bar. They refused.

The truck drivers got out and gave me a good tip. The Mexicans insisted we go back to the bar, reset the meter and start the trip over.

I told them I planned on giving them a break for agreeing to share the cab. They would not be mollified.

Whatever. They were insistent that they were not going to get ripped off.

We went back to the bar and reset the meter.

Just to tweak their noses I rolled down the windows and told them there would be an extra charge for heat.

These folks decidedly had no sense of humor. So after they rolled the windows up I rolled them down again and hit the window lock button.

"Let's just leave them down for a minute. Those truck drivers smelled pretty bad."

Turned out when I got them home that they didn't have enough money to cover the fare, and they were still accusing me of cheating them.

Luckily for them it was way too busy to argue over a couple dollars.

Next time I'm leaving the windows down.

Haven't been doing much gaming lately. Been working more than I like, so much of my thought has been in that direction. I told this story to someone the other day. Hadn't thought about it for years.

So I picked up this drunk guy (yes, this is a taxi story, not a gay story). Nice guy. Lived quite a ways out of town. Told me his address, Ringo road*. It was a gravel road up in the hills that I was unfamiliar with. I pulled out my map for a quick peek. No problem, he says, no need to look at your map. "I'll show you how to get there." It was night. It was pitch black. I learned years ago to not trust a drunk's sense of direction. But this guy seemed like a competent guy. He was well dressed, and he didn't seem that drunk. I figured he could get us there.

There I go figuring again.

Away we go. Down the Johansen Expressway, up the Steese Highway, right on Gilmore Trail "it'll be on the right in a couple miles." Things are going good to this point.

He was passed out.

I had to shake him awake. "I don't see Ringo Road. How much further is it?"

He looked around, "Where are we?"

"We're on Gilmore Trail. You told me that Ringo road was just a couple miles, four miles ago."

He looked around again. "I think we need to go back. No. Wait. I don't think we're there yet. Just keep going."

So I continued down the road. After another couple miles he said, "How much further is the Steese highway?"

(pregnant pause, with much rolling of eyes)

"The Steese highway is behind us."

"I thought we were going towards town."

"I think so. I don't recognize any of this."

I stopped and pulled my map out.

"Let me just take a look at the map."

Okay. I turned around and headed back toward town.

He started complaining. Can't say I blame him, but, as I pointed out, he told me that he would give me directions. It was pitch black in the hills, and I didn't realize he had fallen asleep until it was too late. "Well. You shouldn't have missed the turn," he said.

I was looking, I replied, I had not seen Ringo Road. The more we talked the more irate he bacame. He started to get rude.

He passed out again.

I insisted he stay awake.

As we approached the street I noted that the street sign did not say Ringo road. "This is John* road."

"You told me Ringo road."

"That's where I live, but you need to turn here."

"You told me we needed turn onto Ringo road from Gilmore Trail."

Now I'm starting to get ticked off. The guy had been belittling my driving abilities, and telling me how stupid I was for not being able to find his house. Plus, I'm mad at myself for trusting a drunk to give directions.

Turns out you need to drive another 3 miles down John, Paul, and George roads before you get to Ringo road.

I finally got him home. He paid the entire fare. (At my insistence.) He was rude enough that a discount was not in the cards.

At this point you are probably wondering, why am I relating this story?

Turns out the story isn't over yet.

A couple weeks later I got a call to pick up the same guy at the same bar.

He got into the cab and made a little small talk. It was clear that he didn't recognize me from our previous trip.

"Do you know where Ringo road is?"

I dummied up, which isn't much of a stretch for me, "Ummmmm. No."

"It runs off Gilmore Trail. I'll show you how to get there."

Off we went. I had to hear the story about the dumb-ass cabdriver who took him home a few weeks earlier. "Dummy couldn't find his ass with both hands and a map. He drove right by Ringo road and cost me an extra $50 to get home." (It was more like $20).

I just said, "Tsk, tsk. Must have been a new driver. He didn't charge you the whole amount, did he?"

"I would have given you a break."

"That's good. I told the dispatcher not to send a dumb ass this time."

He passed out. I got him home. He gave me a $20 tip, but not before he ranted about how good of a driver I was.


*Some road names have been changed.


The staff and management of &games sends their condolences and prayers to the victims, families, and friends of the Virginia Tech shooting. Truly a sad event.

The fall out of the event boils down to this:

If you think more gun control is necessary, this event will help solidify your opinion.

If you think one legally armed student or faculty member could have prevented or minimized the tragedy your opinion will be bolstered.

Personally, I would rather face a deranged murderer with a gun in my possession than without. I would not wish anyone to be unarmed in the face of mayhem.

I do note that none of the prominent politicians running for President are touching this event with a ten foot pole. Odd. Big chance to rally the base and present one's self as a leader in the time of crisis. Could this be proof that all the candidates are wishy washy, spineless, wait to see which way the wind blows, morons? I believe it is.

On a completely personal note, and I do feel guilty for feeling this way, I am glad Don Imus is no longer the main news story. That story was getting old, and showing no signs of abating.

Haven't been doing much gaming lately. I did take Twilight Imperium with expansion for a test drive the other day, but that's about it. Been working almost every day since the Brimfrost Game Convention.

Anyhoo. The point of this post is to bring attention to an interesting blog that I have been following for some time.

He hadn't posted anything for a year, but in the last couple weeks he has posted some interesting, well edited videos.

The content is very Anchorage. Mostly underbelly of Anchorage stuff.

Why do I pity the youth of today? Let me count the ways.

Pulled this quote out of a Google search. I could probably write 5000 words on these few lines, but I will spare you. I'll let the words speak for themselves.

Sadly the link to the blog didn't work.

3 Dec 2006
i am so proud of myself today! becase just yesterday i played six hours of monopoly straight it was the longest board game i have ever played! sadly no one won!


BTW, I was searching "boardgame" and "Alaska."