Warmer weather is finally upon us. 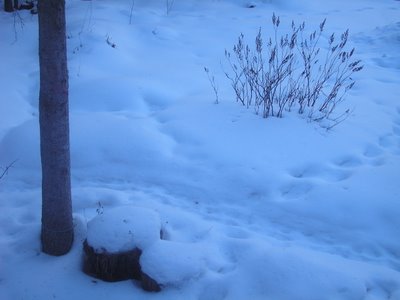 There wasn't a whole lot of snow this winter, as you can see. March was fairly cold, so what little snow that fell has not yet melted.

The pussy willows are usually blooming by now, but not this year. They bloom when the ground is still frozen, long before the snow is gone. Since April 1 the temperature has actually been getting above freezing for at least 8 hours each day. As the nights get shorter and the days get warmer I thought I would post a picture taken from my front steps every few days just to document the progression of break-up (or spring as it is known in most of the English speaking world).

Right now, only a few weeks after the equinox, in the interior of Alaska we find ourselves with 14+ hours of daylight and are gaining nearly an hour each week. Even though the sun sets every day, by the second week of May the night sky will be too light to see the stars. Perhaps by the second or third week of May the bush in the picture will start to bud.

By the way: The second error I caught in the previous audio review is that the traitor does not have to go the entire game without being unmasked before he can win. He merely gets to flip 2 swords if he finishes the game unnoticed, he can win even if his identity is known.

Comments:
Looking forward to your photo journal of spring. We just hit mid-70's today; spring bulbs are up and some are blooming; lawn is showing some green; trees are beginning to bud. What we need, always, is more rain -- it's been a while since we had any moisture, and the perennials need it. We'll turn on the sprinkler system this weekend, unless the long-range forecast has freezing temperatures in it.

Whoa. Sprinkler system. Is that for watering the moose?